Location: The desert city of Arlatla
Race: Lizard Folk
Episodes: Series 2, Episode 9, Red Hall Part 4 & 5
Appearance:  Grinx appears smartly dressed, and has a study of his own as well as servants to attend him.

Personality: None of the party are familiar with lizard folk, but Grinx appears to be honest, if a little impatient.  His is discreet, and not above breaking rules if it suits him.

Background: Little is known about Grinx.  He has risen to a high rank in the Artlatla guard, but he has not elevated himself enough to have entered the Red Hall.

What Happened during the Roleplay:  He negotiated with the party to give them entrance into the Red Hall and provided them with a map.  In return he insisted on payment and an item as a deposit.  He bargained hard, but also believed Leigheas’ ruse that the ‘Erol Flinn’ armour was worth as much as a ship.

When the party returned from the Red Hall he sent his servant to aid their escape.

Chance of recurring in future episodes:  Low.  They may return to Arlatla at some point but it is unlikely that Grinx will want anything to do with these wanted killers now that their agreement is settled.

Personality: A smile is always present and civility close at hand, but there is a shrewd businessman underneath.

Background: Diafre is a merchant from a line of merchants.  He carries out his business with many family members accompanying him in the caravan, including his son.

What Happened during the Roleplay:  The party encountered Diafre on the way to Arlatla.  He had abandoned the trip there because a monster; a gibbering mouther was camping further along, but he made a deal with the party to get them connected in Arlatla if they could deal with the monster.

Chance of recurring in future episodes:  High.  Diafre is looking after the horses and they will want to visit him before they return to the old road across the Da.

Personality: Studious and generally open to others who do not act aggressively.

Background: From the Eastern Glade, near the town of Mid-Nis, Llanrol trained in Vatet as an archaeologist  specialising in the arcane and ancient elven races of Chandanis.

What Happened during the Roleplay:  Llanrol met the party as they were heading to a newly-uncovered site in the Da.  He provided information as a curtesy and hoped that the party would share any findings with him.  They have not looked him up.

Chance of recurring in future episodes:  Low.  Llanrol continues to research the ancient civilisations of the land and hunts forartifacts but will not travel far from the Eastern Glade.

Background: The party encountered the lich in his lair underneath the Da sands.  His story goes far beyond the lifetime of most mortals. The party discover more in later series.

What Happened during the Roleplay:  He awoke ‘ahead of time’ after the party had entered his central room and a trench had filled with a firey stream. Orix would have been consumed by the lich if Nomo hadn’t broken an orb containing his essence.  The lich then employed the party believing their presence to be fated and they voluntarily drank the red crystals requested by Hayyaes.

Chance of recurring in future episodes:  High. The party have a mission to carry out and are expecting to be rewarded.

Appearance:  Weather-worn from working in the gardens and slightly overweight.

Background: Dais runs the pub with a group of other farmhands.  Her business skills and charisma means that she operates the place and in turn supports the other farms.

What Happened during the Roleplay:  Dais welcomed Leigheas as a known customer and they shared a belief and reverence of the God, Pelor.  For his good will she provided the cleric and his companions free drinks.

Chance of recurring in future episodes:  Moderate. If they are in the area they know they can find a good welcome there. 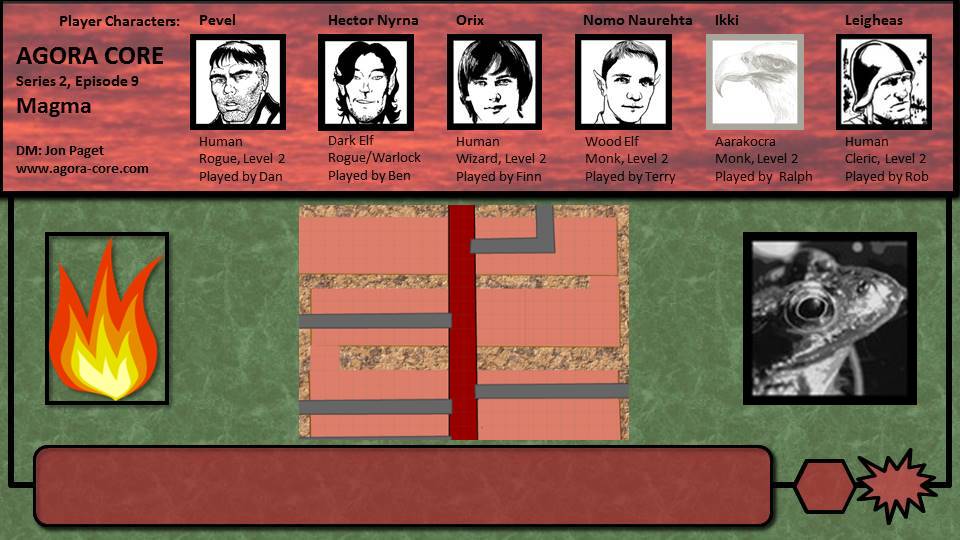 The party have made it to the desert city of Arlatla, but who can they trust to get them into the ancient library?

DM:  You can estimate the size of the creature by the footprints in the sand.
Pevel:  And what do they estimate in size?
DM:  8.

The Ioun Stone of Awareness

Orix:  What does the stone do?
DM: The stone of awareness?…
Leigheas:  You throw it at someone and it makes them aware.
Orix:  I think that would work with any stone!