After a busy time in the workshop, what started off as two new projects grew into four. This was because the Agora Core roleplay group needed new scenarios to match the intensity of the moment. Let’s walk through them…

Token’s Rock
(available from DMs Guild)
In Agora Core, the group was pursuing a slippery character called Baden, but to find him they would need to leave their comfort zone and enter a strange subterranean environment where ancient secrets are waiting to be revealed. This is a rich and surprising storyline that provides opportunities to gather information as well as some unique combat encounters.

Quarterstaffs of Legend
(available from DrivethruRPG)
After creating the Treasures of the Desert book, which contains 100 magical items, I watched a number of Japanese anime series and felt inspired to create a series of unique quarterstaffs. This was a fun project in which its simplicity allowed me freedom and flow to create interesting items. Quarterstaffs are generally underrepresented but there’s no reason that these honed pieces of wood couldn’t be lethal in combat or useful in traveling.

Tomb of the Witch Queen
(available from DrivethruRPG)
Currently in Agora Core, the party are biding their time, trying to stay in the good books of a tyrant until they can strike a deadly blow. From a range of options, they decided to go on a tomb-raiding mission for their employers. Creating this adventure was fun because it was a blank canvas and unrelated from the main plot thread. As I thought about who Sassaya (the Witch Queen) was, I thought about the history of the tomb, her strong, enduring magical essence, and how it was discovered later on by devotees as well as women who had nothing left to lose.

There is a section called the Witch’s Labyrinth, which is based on an idea that is a story element in the Hilda animated TV series as well as the sweet and sour anime, Magica Madoka. I decided to make traversing the labyrinth a player-driven experience, which is a decision I’m really pleased with.

War of the Wilds
(available from DMs Guild)
Inspired once again by the Agora Core group that I DM. A major plot thread in the campaign is the war over the wild and new landscape of the Da. As the players tried to gain allies and find an opportunity to defeat a dangerous enemy, they needed a backdrop where events and conditions could unfold at any given moment. War of the Wilds has become the setting template that I use for each session when they are traveling through the wilds of the Da.

Thanks for taking this tour of the new books with me. If you decide to give them a try with your group, I hope you enjoy the experience! Please do let me know. 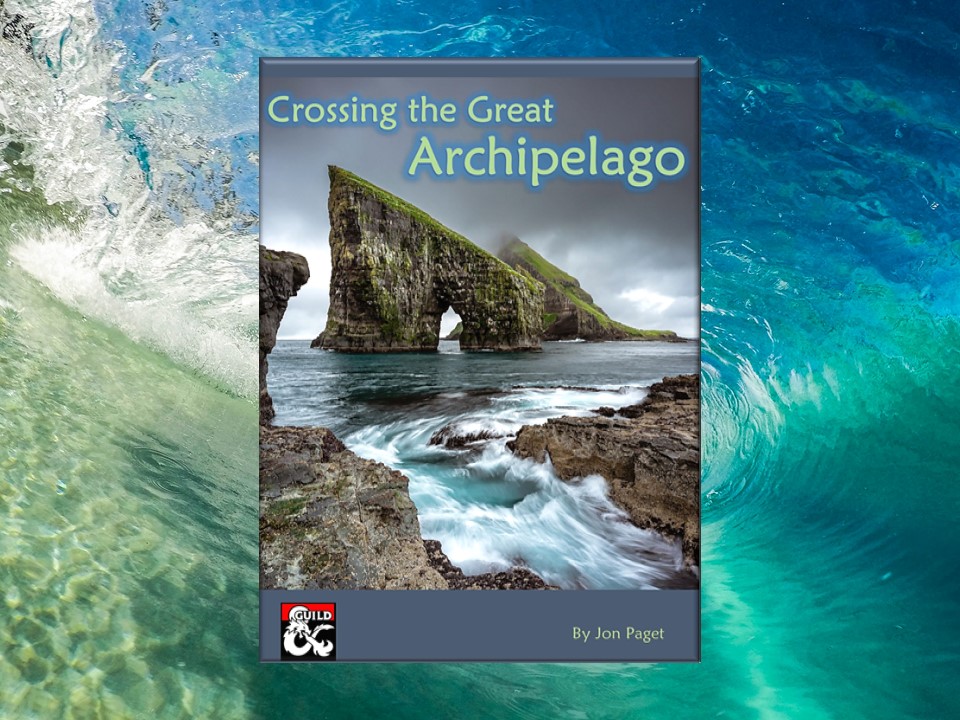 The D&D group I DM are currently crossing the seas and decided to create a module based on their adventures.  It turned out to be a much larger volume than anticipated!  I am very pleased to release this to other groups and DMs who are looking for buccaneering, sea-swept adventures to add to their stories.

This was always going to be a product where the author’s royalties would go to a charity.  It’s a strange time for everyone, and I wanted to help in some way.  In buying this product, you will be helping ASTEP (Artists Striving to End Poverty); their Arts Resilience Fund is designated to bring the arts to those most in need during this time.

Crossing the Great Archipelago is available from DM Guild for $4.99.

The islands of the archipelago are jealously guarded by greedy rulers and powerful, wild creatures. The waters are the hunting grounds for pirates and sharks while corals and storms sink the ships of many a reckless captain.

There are 30 different scenarios and many unique encounters as well as some classic watery foes!  There are also 60 different treasure items, all rated from low to high, depending on the encounter.

Happy adventuring, and stay safe and well out there!