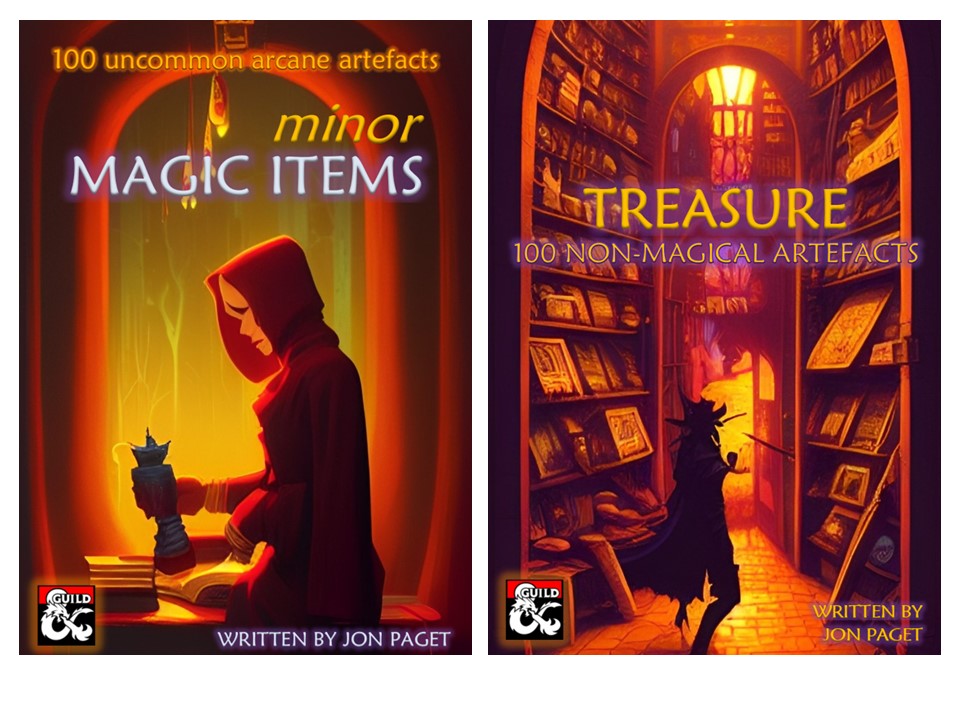 Each module in the Danger Series didn’t just come with five adventures, it also came with twenty minor magic items and twenty non-magical treasures, which the DM could add to any adventure as they saw fit.

Now that I have published five separate parts in the Dangers series I have 200 magical and non-magical items, so it felt like the perfect time to focus on these treasured items and give them the spotlight, and I am delighted to have published a separate module for each! Within these products I wanted to add further instructive and descriptive content, as well as tables that order the objects alphabetically and by category. Most importantly, I created a table that ranks the magic items by power, and the non-magical items by value. This means that a player can get that sense of excitement when rolling a d100.

Finally, I was able to do what the one-pager adventures didn’t allow, illustrations. It was fantastic fun finding and choosing graphics to complement the items. It gives the modules much more flavour. The cover and most of the item art come from digital AI sources. I know this is a contentious topic, but as a writer and hobbyist I feel it is my best and most viable option at the moment.

Minor Magic Items is very specific, as I know there are many powerful items already out there. This isn’t what this module is about. The idea in adding additional items to the Dangers Series was always to create items that were unique, strange and useful rather than game breaking. Each items still needs the player to use their ingenuity and cunning.

Treasures: 100 Non-Magical Items aims to add more flavour to the trinkets and jewellery that players find. Rather then depending on the DMs Guidebook and avoiding finding the same purse of gp and ammo on each enemy, there are plenty of useful items here, that are interesting in appearance, application or value.

Above all, these modules are another useful item in the DM’s toolkit. If you include these 200 items, I hope you enjoy sprinkling them into your games! 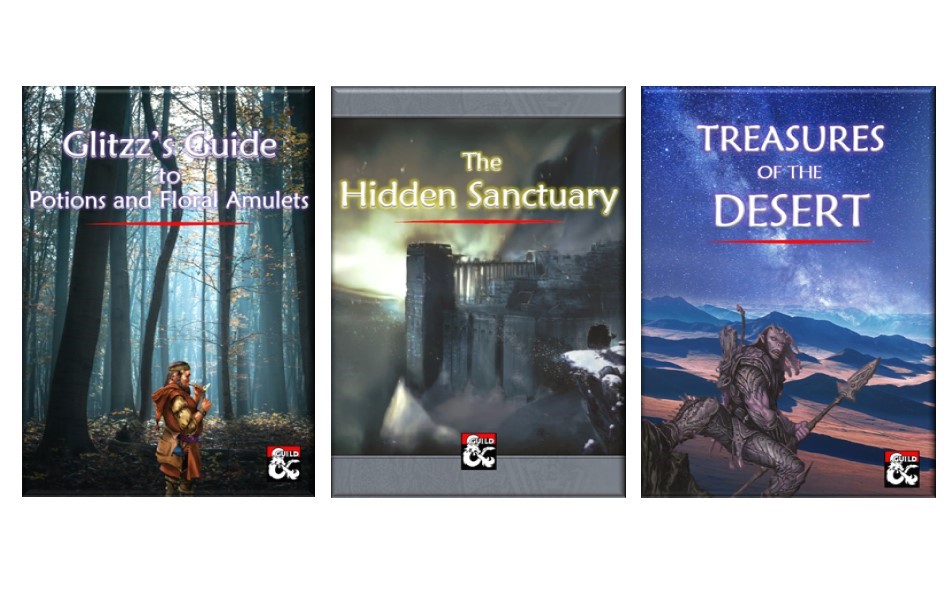 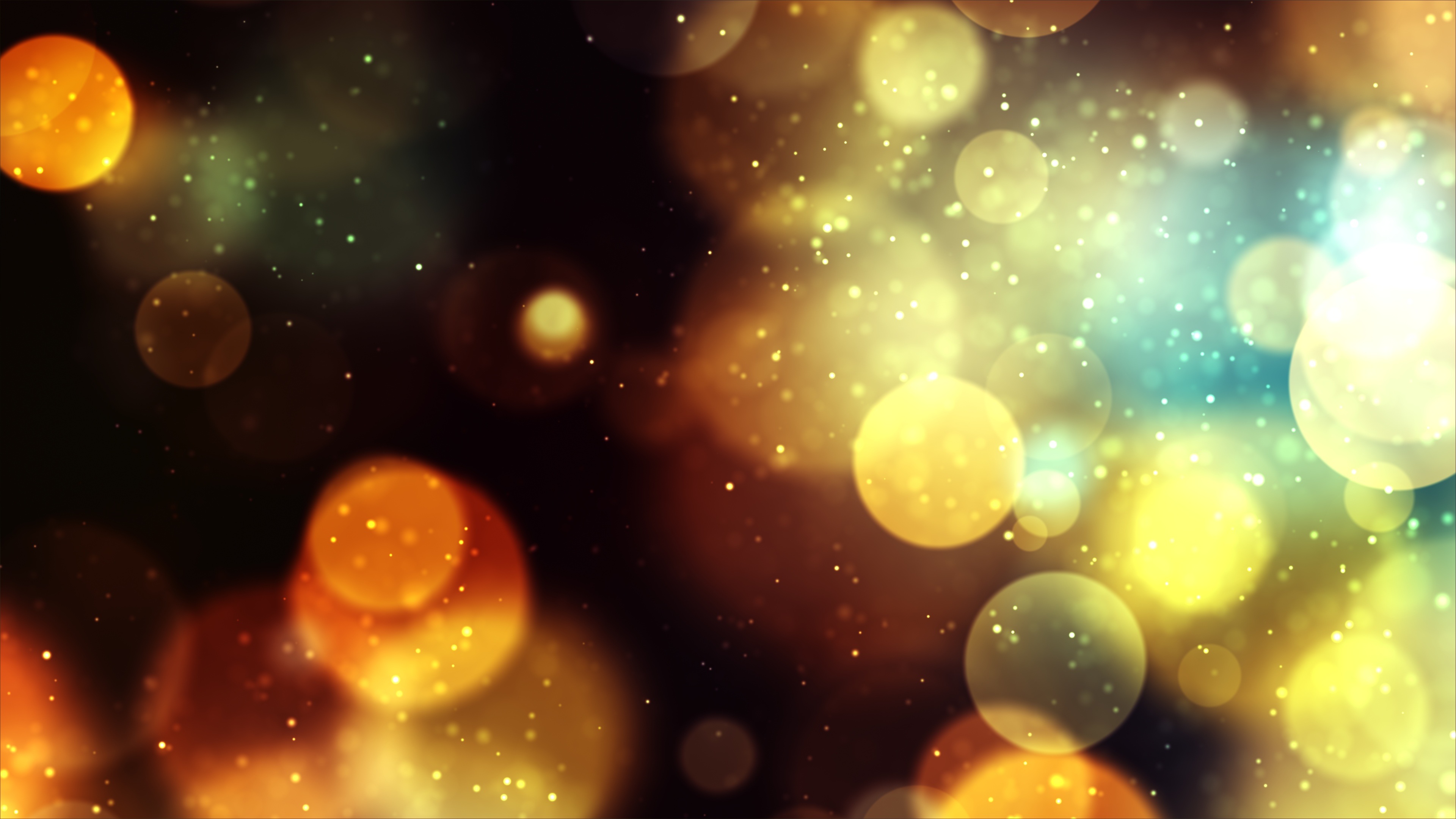 In Part I, I discussed the types of spellcasters and how they interacted with magic in the fantasy realm. It’s time to look at the mechanics of spellcasting.  How does it work in practice?

Here are the basics…

Each character class or sub class is a little different, so let’s compare…

Bards don’t study magic, they take what they know and perform. For that reason, bards have known spells and a charisma modifier.

Clerics are conduits for divine power.  They use Wisdom as a modifier.  They can cast any cleric spell available up to their current spell level, but need to have them prepared.  This is their Wisdom modifier + Cleric Level.

Druids draw on nature, as clerics draw on the divine.   They use Wisdom as a modifier.  They can cast any druid spell available up to their current spell level, but need to have them prepared.  This is their Wisdom modifier + Druid Level.

Eldritch Knight is a subclass of the Fighter.  Like Bards, they have known spells they learn as they improve and apply to their fighting style.  They draw from the wizarding spells and their modifier is Intelligence.

Monks learn to use magical energy called Ki.  They channel this energy in their martial art practices uses Ki Points.  The subclass Way of the Four Elements can cast elemental spells using Ki points.  Like Bards and Eldritch Knights, these become Known but are referred to as Elemental Disciplines and not spells.  They use a Wisdom modifier to determine out how effective their spells are.

Paladins learn to draw on divine magic as clerics do.  They use Charisma as a modifier.  They can cast any cleric spell available up to their current spell level, but need to have them prepared.  This is their Charisma modifier + half the Paladin’s Level.

Rangers learn to draw on nature as Druids do. But they behave far more like Bards and Eldritch Knights, applying what they have learned and using their Known Spell, learning more as they level up.  They use a Wisdom modifier.

Arcane Trickster is a subclass of the Rogue.  Like Bards and Rangers, they don’t study magic, they take what they learn and apply it. For that reason, these Rogues have known spells .  They use an Intelligence modifier.

Sorcerers have no need to study as magic is in their veins. Very much like Bards, they perform what they know.  Because of this, Sorcerers have known spells and a charisma modifier.  They also have Sorcerer Points, which can be used to enhance their spells in some way.

Warlocks are peculiar because although they have spell slots, all of these slots are the same level as their current spell level. They can still cast lower level spells but they will be using a higher level spell slot to do it.  They perform the gifts of their patron, so like Bards, they have known spells and a charisma modifier.

Wizards are the students of magic and draw from a spellbook to prepare spells (They should also use physical components as part of the spells’ preparations but not all roleplays apply this).  Because of this their known spells are whatever spells are in their spellbook, so researching and finding spell scrolls can be exciting!  They use the Intelligence modifier.  The number of spells they can prepare is their Intelligence modifier + Wizard Level.