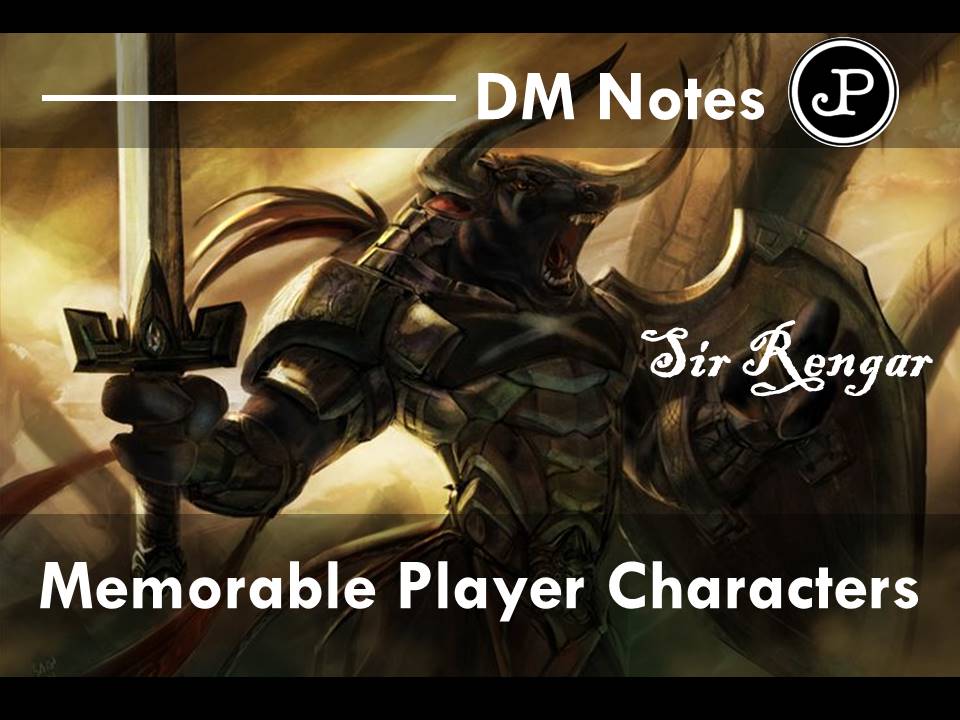 In the Roleplays you have played, what Player Characters stood out? Which ones are still memorable and why? By a stand-out character I mean player characters that were unique, and memorable in some way.

For my second choice, I pick Sir Rengar. For the campaign Jungles of Nocturnal Madness, the DMs allowed us to choose our own PC, but they had to be from specific books available in Unearthed Arcana, which is an area of D&D designed to create custom character and creatures not available in the Players Handbook or Monster Manual, in my case I was given Eberron, Waterborne and That Old Black Magic. As a race of creature, I chose a Krynn (Sea-faring race of Minotaur) and was asked to select 3 types of classes. From those, the DM selected paladin. I was excited!

For a visual idea, see this brilliant picture by brianvadell.

Sir Rengar Gutlub is a fearsome agent of order and took the Oath of the Crown, dedicating himself to society and the just laws that hold it together. In appearance he is a very resplendent bull of legend created to inspire allies and terrify agents of chaos. In his owns words, he had a privileged background but never forgot that his mother did not. He treads the line between the honest working folk and the pillars of society. In truth, he can be a bit of a hypocrite; he believes in upholding moral standards of society, but is immensely proud of his noble birth and can be arrogant and let praise go to his head.

In the first two instalments of Jungles of Nocturnal Madness, the PCs encountered each other in a sea battle between crusaders and pirates during a devastating storm. The survivors ended up on an unknown island. Sir Rengar’s mettle was tested in a jungle full of terrifying creatures (especially at night!). He battled with the need to work together with piratical chaos-agents for the greater good and survival. Without the glue that society brings, he had to refocus and found moments of chivalry and aid kept him in check. When they found a corrupt city with segregated layers of society based on wealth and status, his goal became clear – to purge the city of corruption! I’m looking forward to the next part of this saga.